Department of Social Sciences and Multiculturalism

Until 1996, the departament of “History of Central Committee of the Communist Party of the Soviet Union” was headed by Professor Ahmad Mammadov, a graduate of Moscow State University.

A. Mammadov also participated in the Great Patriotic War and was a war veteran and served as secretary of the Azerbaijan Agricultural Academy party organization. Until 1988, only “History of Central Committee of the Communist Party of the Soviet Union”. The history of Azerbaijan and the political history of the 20th century were taught after 1988.

The department of "Philosophy and Scientific Communism" is not headed by the reformist professor Ahmad Hasanov. He worked as the head of the department from 1958 without a faculty until 2008. A. Hasanov operates and is associated with the formation of the AKTA party.

As a result of scientific research conducted during the research year, the history of this field was studied, the foundations of the socio-legal base were studied. Together with the international relations and science departments of the university, the international relations of the department are expanding day by day. Cooperation agreements have been signed with leading universities in Turkey, Russia and Kazakhstan. Cooperation agreements have been signed with Belgorod Cooperation, Economics and Law University of the Russian Federation and Kostanay Engineering and Economic University of Kazakhstan.

Students, who are members of the student scientific circle, also took an active part in social work. At the same time, their activity was highly appreciated at events of various scales. Students who are members of the "New Generation" student scientific circle took an active part in the Student Scientific Conferences organized by the Student Scientific Society of the University and were awarded various prizes and awards.

Many members of the "New Generation" Student Scientific Circle have successfully participated in national conferences and knowledge contests.

In the knowledge contest on "Heydar Aliyev and the history of Azerbaijan" organized at the Heydar Aliyev Center in Baku in 2016, our students took 2nd place among 44 universities of the Republic and were awarded honorary diplomas.

In 2017, our students successfully participated in a similar competition and won the 3rd place among 47 universities in the country.

Teachers of the Department of Social Sciences and Multiculturalism also contributed to the success of the students who were members of the association in both knowledge competitions.

In 2018, the members of the association successfully participated in the knowledge contest organized by the Ministry of Education of the Republic of Azerbaijan and the Baku Heydar Aliyev Center.

The department regularly conducts faculty events in connection with significant days in order to educate our students in the ideas of patriotism and statehood. “January 20”, “Khojaly genocide”, “March 31 genocide of Azerbaijanis”, “April wars”, “Azerbaijan Democratic Republic” anniversary, “June 26 National Army Day”, “State Independence Day”, “National Revival Day” “Flag Day ”and so on. Scientific-theoretical conferences and round tables are organized on the occasion of such events. The organization of debates on certain topics among students at the department was met with great interest. Debates organized on the occasion of the 100th anniversary of the Azerbaijan Democratic Republic and the 650th anniversary of the prominent Azerbaijani poet Imadeddin Nasimi revealed that students are free-thinking.

The department held scientific-theoretical conferences with the participation of the faculties of Agrarian Economics and Agribusiness in connection with the anniversaries of prominent personalities Generals Aliaga Shikhlinsky, Samad bey Mehmandarov and others. 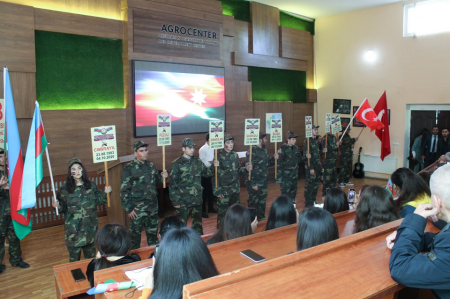